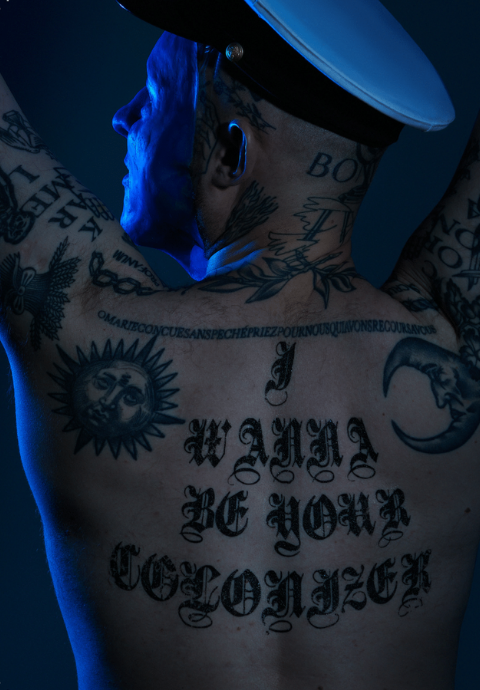 This novel is set against the background of real events. Yet, it is neither a faithful account nor a documentary report. The names of the protagonists, ships and other characters as well as their behaviour are all fiction; only the backdrop of the main plot has been taken from real life.

It is a story of a human tragedy perpetrated by the merciless sea.

To those who shall never return to their home port. 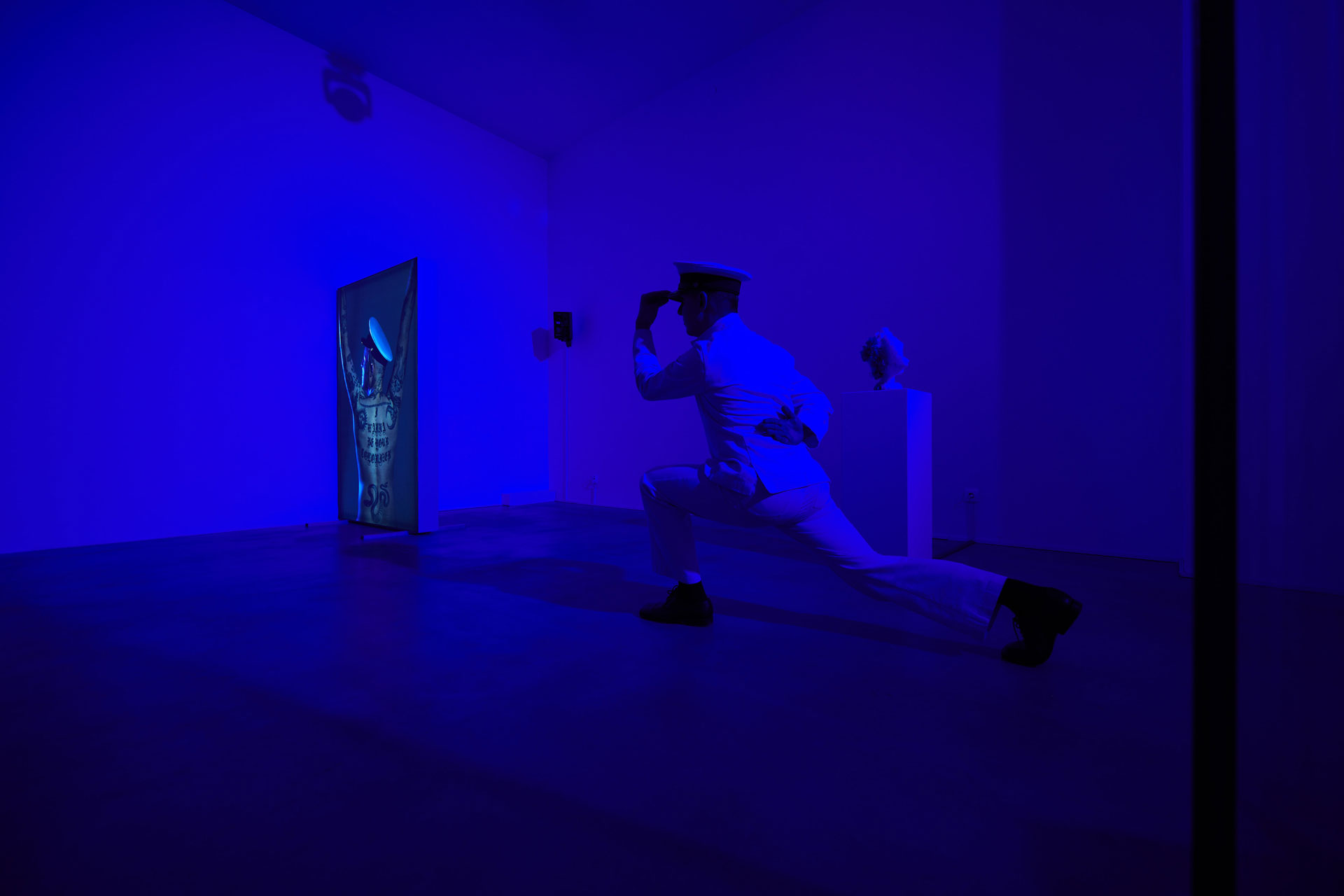 Who was that mysterious middle-aged man whose photographs Przemek Branas came across in a second-hand Dutch furniture shop? Twelve small-scale sepia images feature a white-clad sailor posing for photographs alone or in the company of smiling women and men, against the background of exotic architecture, lavish hotel interiors, vintage automobiles or by a ship bulwark. Handwritten notes on the reverse of the photographs indicate that they were taken on the island of Curaçao between 1932 and 1937. How did they make their way to Jarosław, a small town in Podkarpacie, where Branas found them? All attempts to identify the seaman have failed. Nevertheless, the artist resolved to re-create his identity as faithfully as possible with the help of the scarce traces available and the associations that the images brought to his mind.

Branas took the brief inscriptions on the reverse of the photographs as his starting point. A graphological analysis allowed him to establish a personality portrait of the person who penned them. That personality revealed strong similarities to some of Przemek’s own traits of character, such as inquisitiveness, creative drive, but also extroversion that sometimes borders on bravado. 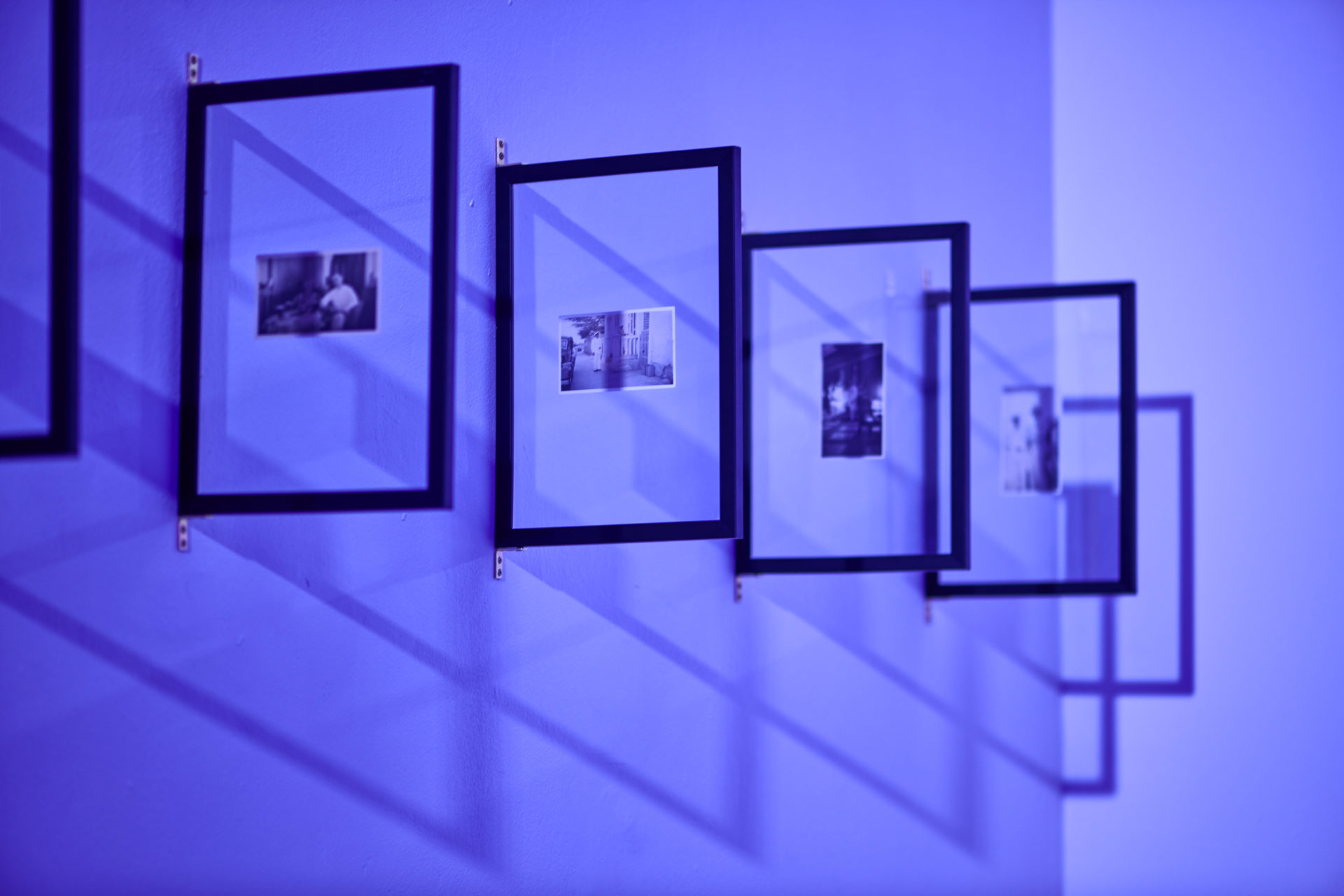 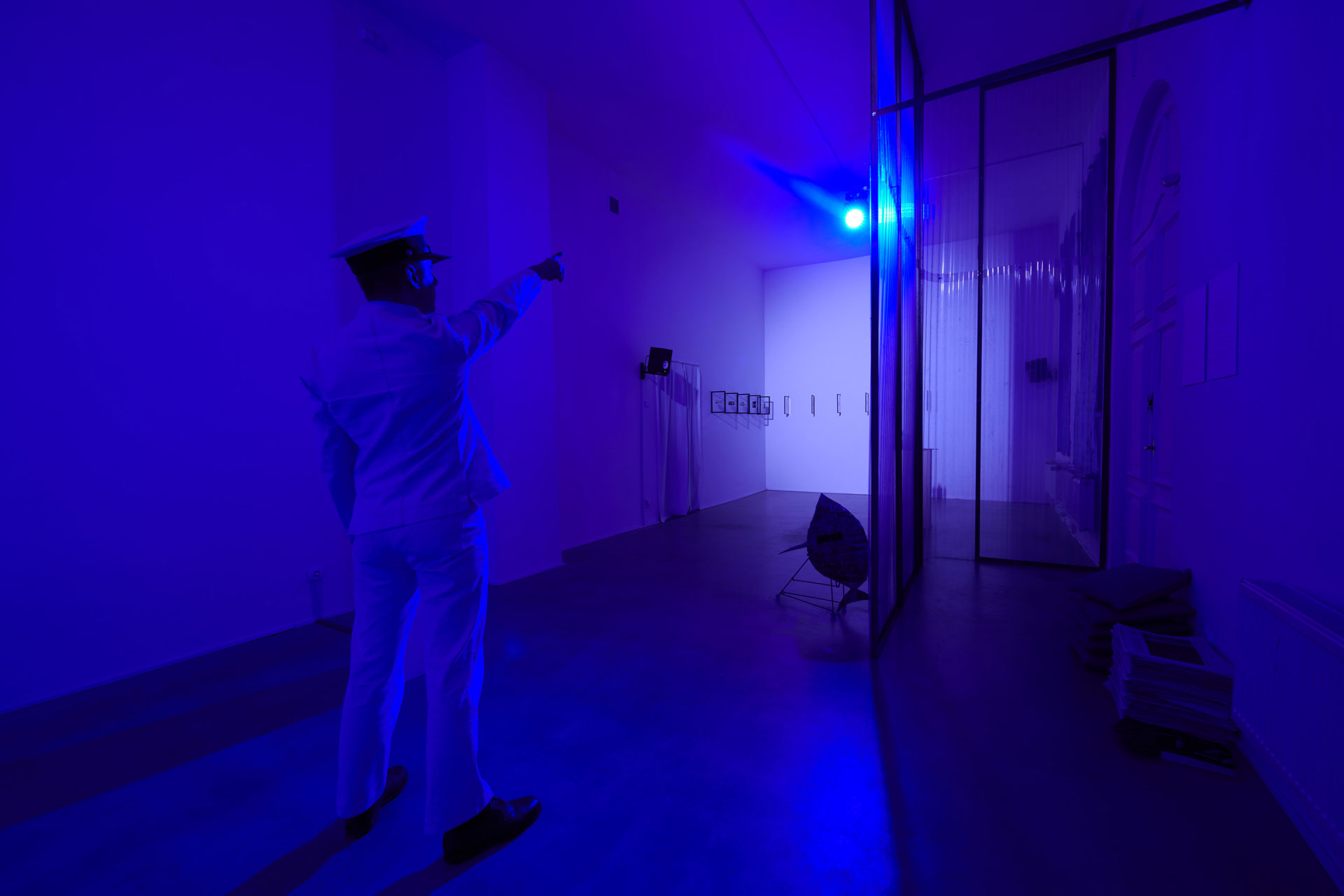 Another step towards identifying the figure from the photographs consisted in creating a mixture of scents that could potentially accompany the sailor on Curaçao. Branas had already experimented with scents in his work The Birth of Black and White presented at the exhibition lords peasants peasants lords (pany chłopy chłopy pany) at the BWA Sokół in Nowy Sącz in 2016, as well as within his individual show Moonrise at the Centre of Polish Sculpture in Orońsko in 2018. This time, the artist distinguished eighty different fragrance notes which he then merged into a single synthetic fragrance, following the perfume manufacturing process. The scents included black pepper, smoke, red saffron, tar and moss. An obvious ingredient was also bitter orange, which is used in the production of the famous Curaçao liqueur. Apart from those, the composition included some rather abstract components, such as the scent of a ship and colour white. Research into olfactory memory (related to the sense of smell) proves that smell is much more sensitive than taste or sight, and we store smells in our memory since our early childhood. When recollected, they trigger specific reactions, offering us a sense of security, pleasure, joy, or otherwise a sense of threat or repression. The attempt to recreate the smell that could potentially accompany the seaman provided yet another layer of Branas’ reconstruction of the stranger figure. 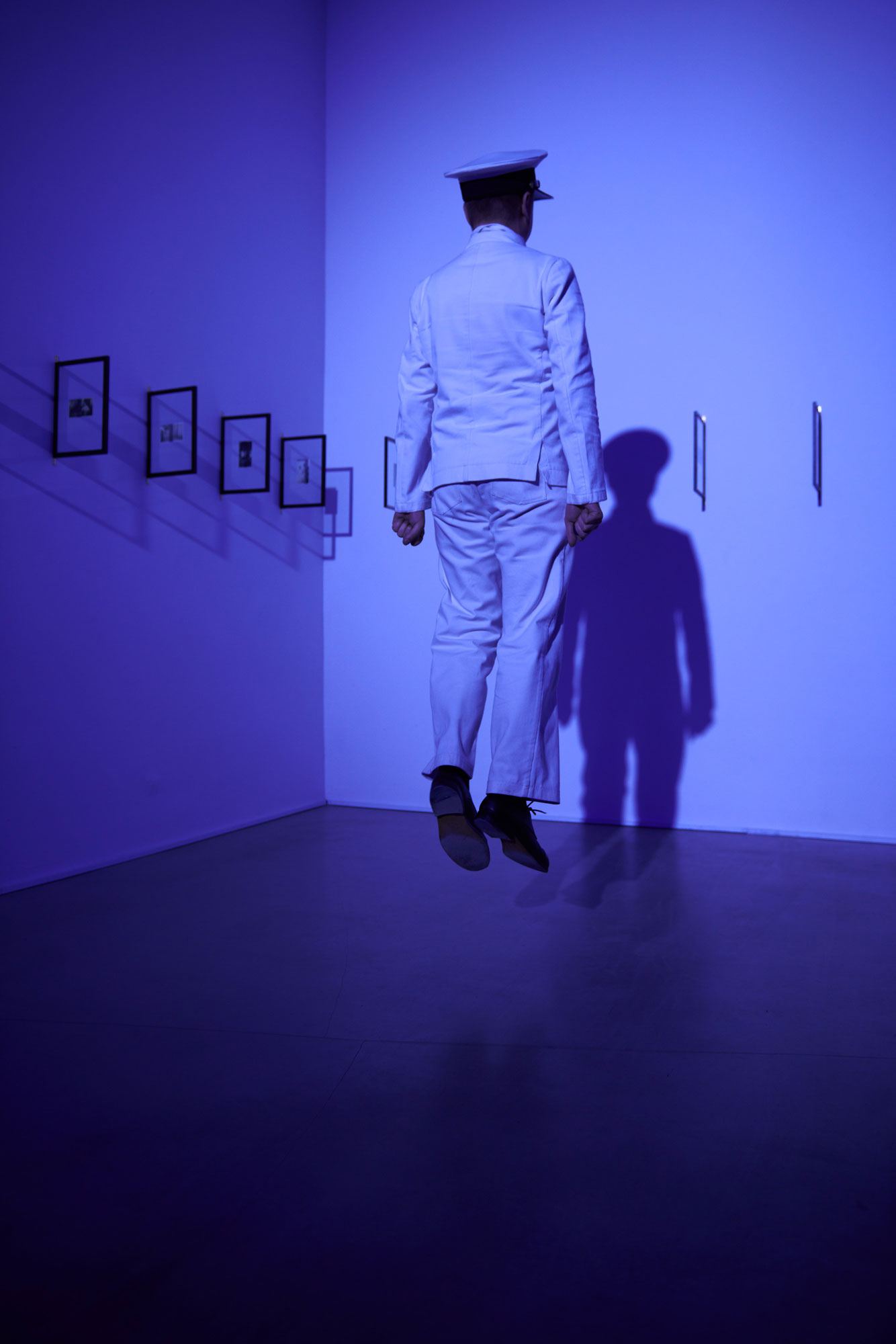 The next stage in “discovering” the seafarer’s identity involved recreating his outfit on the basis of the preserved photographs: sailor cap, white uniform, tailor-made leather shoes. Using the images, the artist also created a mask of the unknown man, under which he hid a cast of his own face. This double portrait forms part of the exhibition, which also features the artist in attendance throughout its running time. Dressed in a sailor’s outfit, Przemek participates in the show and animates it for three hours every day. Performing unspectacular gestures and minor activities, interacting directly with the viewers, the artist “incarnates” the evoked phantasmal figure. A similar situation was staged onboard a passenger ship during Przemek’s journey from the Tri-City to Karlskrona and Malmö in the autumn of 2018 – during that short cruise, the artist portrayed himself in a sailor’s outfit in photographs and videos. Footage from that journey forms part of the exhibition in the form of a film with added excerpts from a range of masterpieces of cinematography, such as On the Silver Globe (1967–1987), Waterworld (1995), Passenger (1967), Prospero’s Books (1991), and Blue (1993). Selected lines and dialogues relate in various ways to the idea of a solitary journey, longing for dry land, the sea, boundless azure blue. Complemented with static shots from the deck and from a cruise ship cabin where Branas displayed the found photographs, the film excerpts evoke pop-cultural clichéd visions of sailor’s life shaped by the feelings of loneliness, boredom, waiting for land to appear on the horizon. The cruise to Karlskrona took only a dozen or so hours, a mere ersatz of a long exotic voyage to Curaçao. Yet, it was not Branas’s intention to simulate the unknown sailor’s oceanic journey, but to offer a condensed experience thereof. An experience similar, for instance, to that of Polish season workers who regularly travel by sea to jobs in Scandinavia. In a similar spirit of imitation, the artist used a tanning lamp, which left him suntanned as if after a long seafaring escapade. 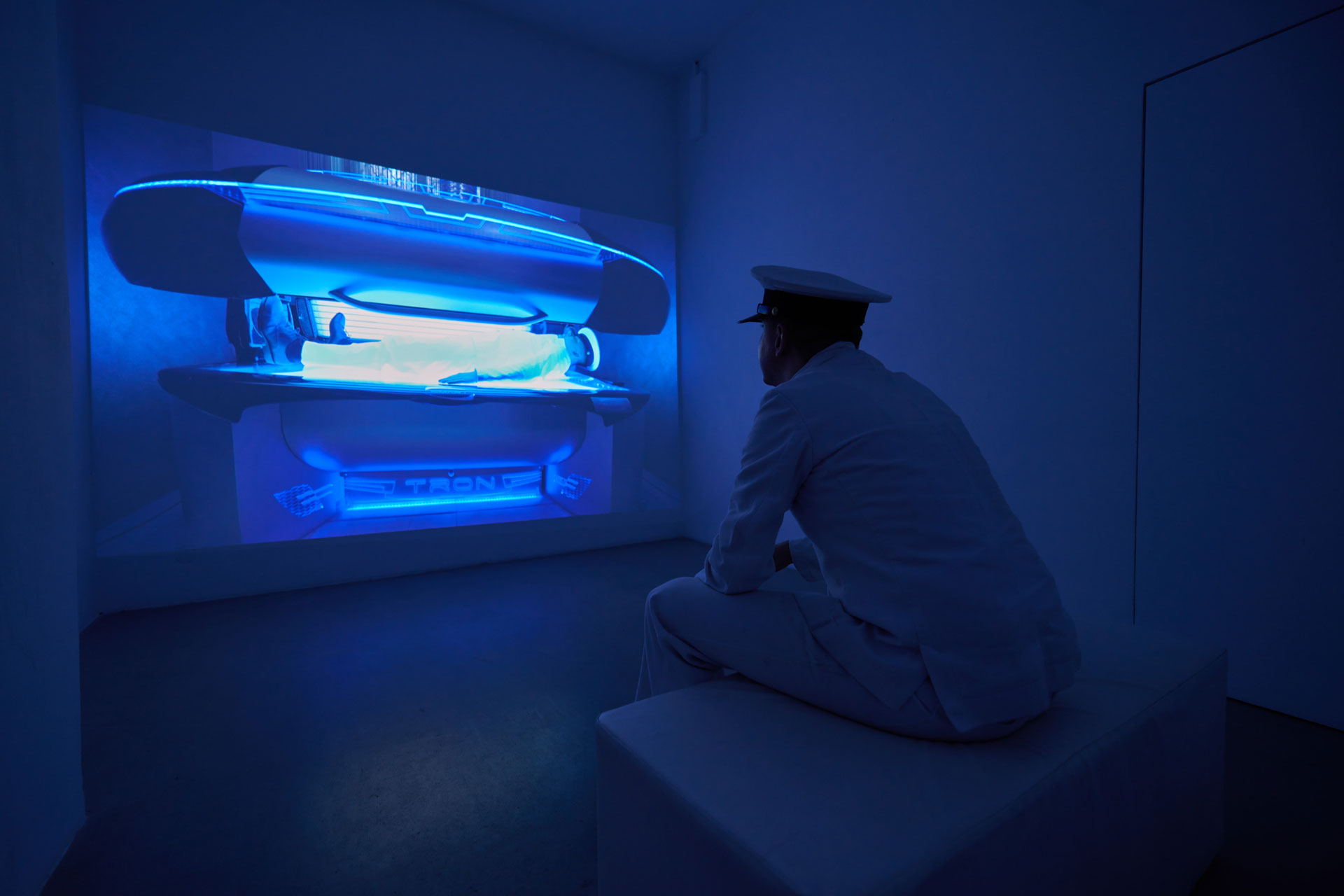 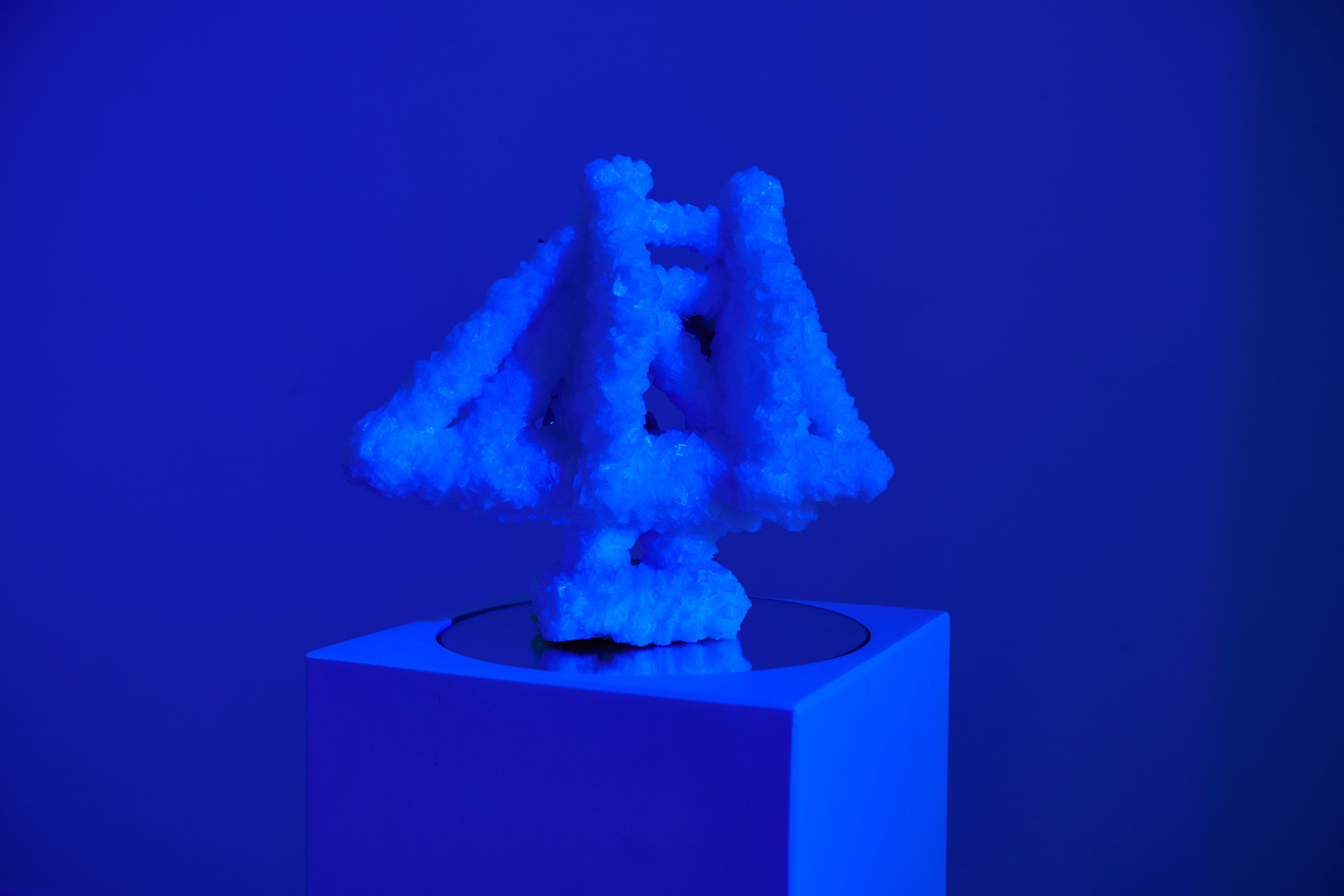 Olga Tokarczuk coined the term bizarre tales (opowieści bizarne), which shares an affinity with Anglo-Saxon mystery tales. Such narratives are distinguished by a spirit of strangeness, volatility, oddity, or even suspension of sense. The artefacts gathered by Branas in his seafaring exhibition emanate exactly such “bizarre” character. At first glance, their connotations are far from obvious. A silicone mask of the unknown sailor. A statuette in the shape of a sailing boat made of cultured copper sulphate crystals. A copper flounder which the artist made many years ago as a teenager using a clothes drying rack. And finally – a plastic bottle made of melted garbage washed ashore by the sea and collected on an Indonesian beach. A common denominator between these objects is a rather quirky marine provenance, a term which turns out to be extremely capacious. The phrase marine motifs immediately makes us think of paintings by such masters as Jan van Eyck, William Turner, and Claude Lorraine. Yet, the Internet quickly proves that association wrong: ships in bottles, decorative ship wheels and porthole-shaped mirrors are also what stands for “marine”. Not only does the term enjoy popularity, but it is also often associated with amateur artisanal production. Creating his marine artefacts, Branas does not aim any higher. His are still artisanal works that seek to express his fascination with the ocean-faring sailor. After all, the artist is no expert in marine motifs. Born and raised in the mountainous region of Podkarpacie in southern Poland, his knowledge of the sea is limited to stories, popular culture and tourist trips. His attempt to track the man from the photographs actually offers a starting point for a broader reflection on the questions of power and postcolonialism, as well as geopolitics. 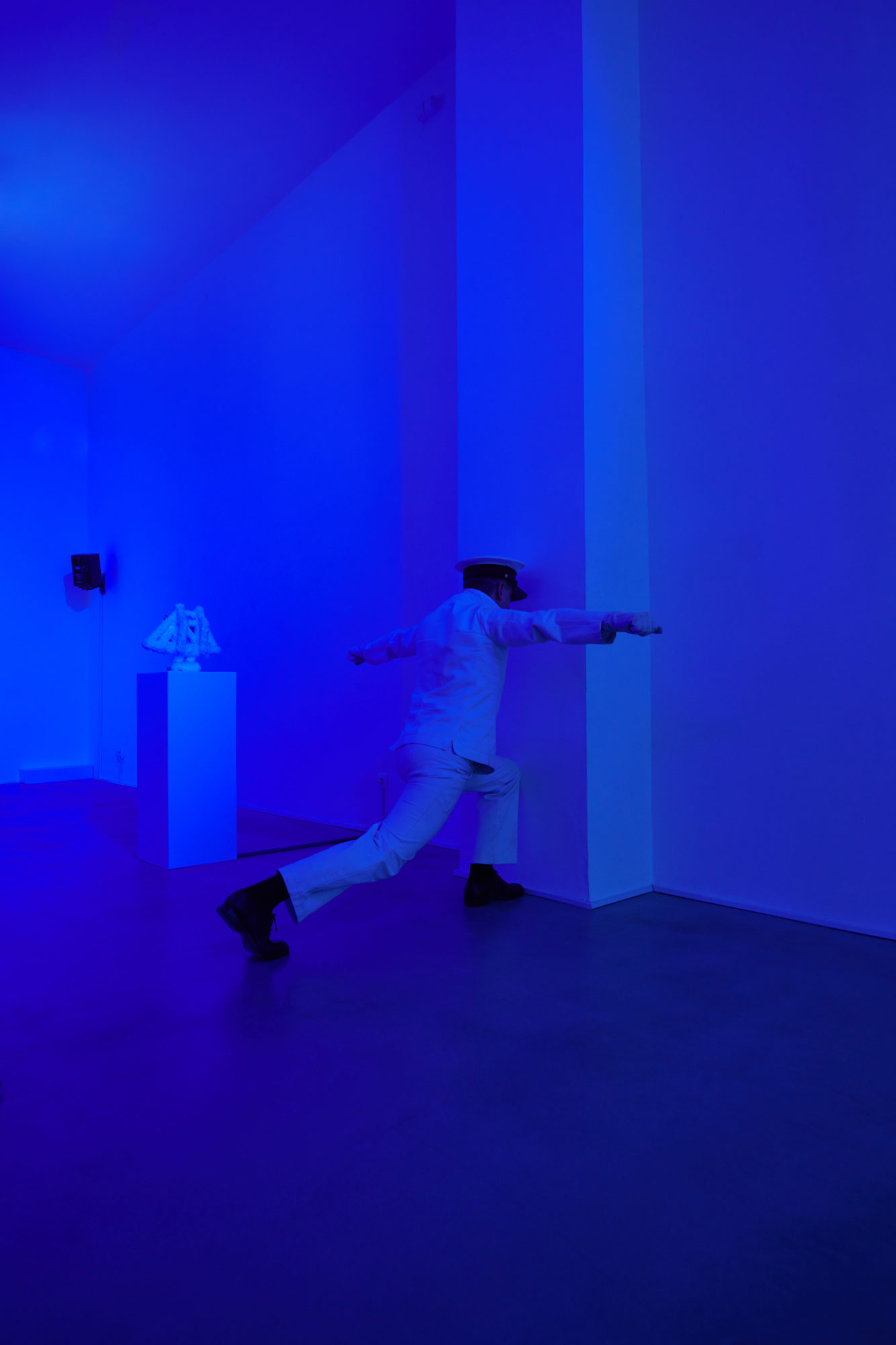 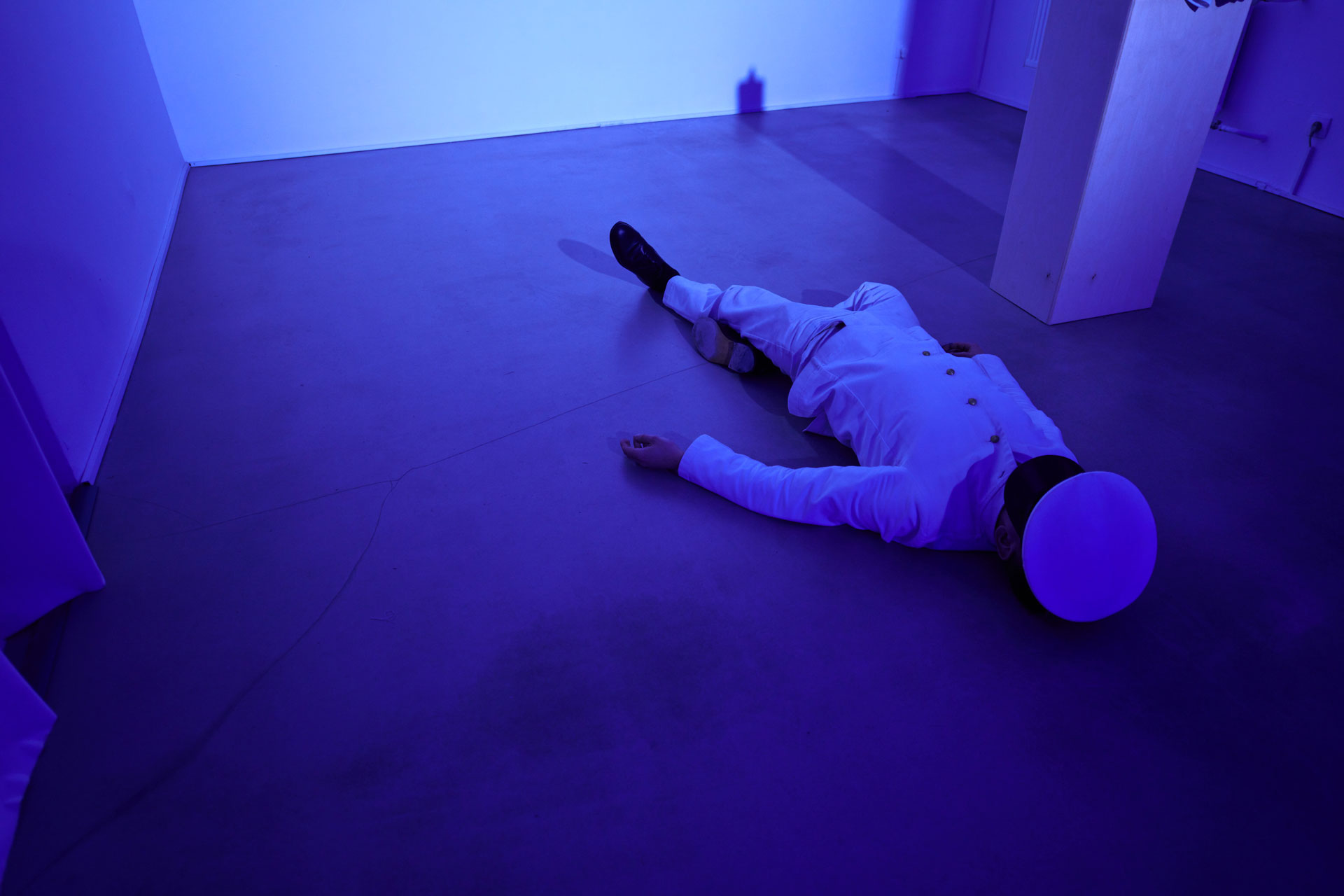 I wanna be your colonizer – reads a tattoo on the back of the sailor whose face is covered with a mask of the man from the archival images. After all, seafaring culture is an area commonly associated with tattooing. Long monotonous days and nights aboard ships compelled people to decorate their bodies with ornamentation. The eponymous slogan also refers directly to the history of Curaçao, a constituent country of the Netherlands in the Caribbean archipelago of the Lesser Antilles. Willemstad, the capital of Curaçao, features in the photographs found by Branas. An online search allowed the artist to recognise several buildings that still exist in the city. A Dutch colony since the 18th century, today the exotic island of Curaçao is mainly associated with tourism and the British-Dutch company Shell, whose history abounds in accusations of causing environmental disasters, collaboration with military regimes, trading in weapons. Having opened its refinery on Curaçao in 1915, Shell profoundly transformed the island. On the one hand, it provided an immense stimulus for its economic growth, while on the other hand – it proved extremely detrimental to the natural environment. Although in 1985 the company sold the plant to the government of Curaçao for a mere symbolic guilder, Willemstad still sees deadly smog hovering above its skyline, and the “asphalt lake” continues to exist in the Schottegat Bay. The refinery is set to close down in 2019, yet the island, destroyed by decades of exploitation and pollution, will take long to return to its natural state. The situation in Curaçao is merely a fraction of the environmental disaster whose effects can be felt today across the globe: while some parts of the world suffer from human-induced draughts, others are threatened with floods from melting glaciers.

The context of the centuries of colonisation and environmental destruction of the island lends an ominous air to the cheerful photographs of the smiling Dutch sailor with 1930s Willemstad architecture in the background. At the same time, the fact that the artist came across these images in a small provincial town in Eastern Poland testifies in a symbolic way to the global processes that we witness, but also benefit from. In an attempt to track the individual story of the anonymous sailor, by reconstructing his figure or even creating it anew, Branas attempts an individual and singular reading of these processes. The artist’s narrative can be read in the context of modern-day geopoetics. Looking at the photographs through the prism of his own self, his own travelling experience, his desires and feelings, Branas incarnates the allegoric sailor figure and brings to life, once again, a homo viator who roams the expanses of dystopia. 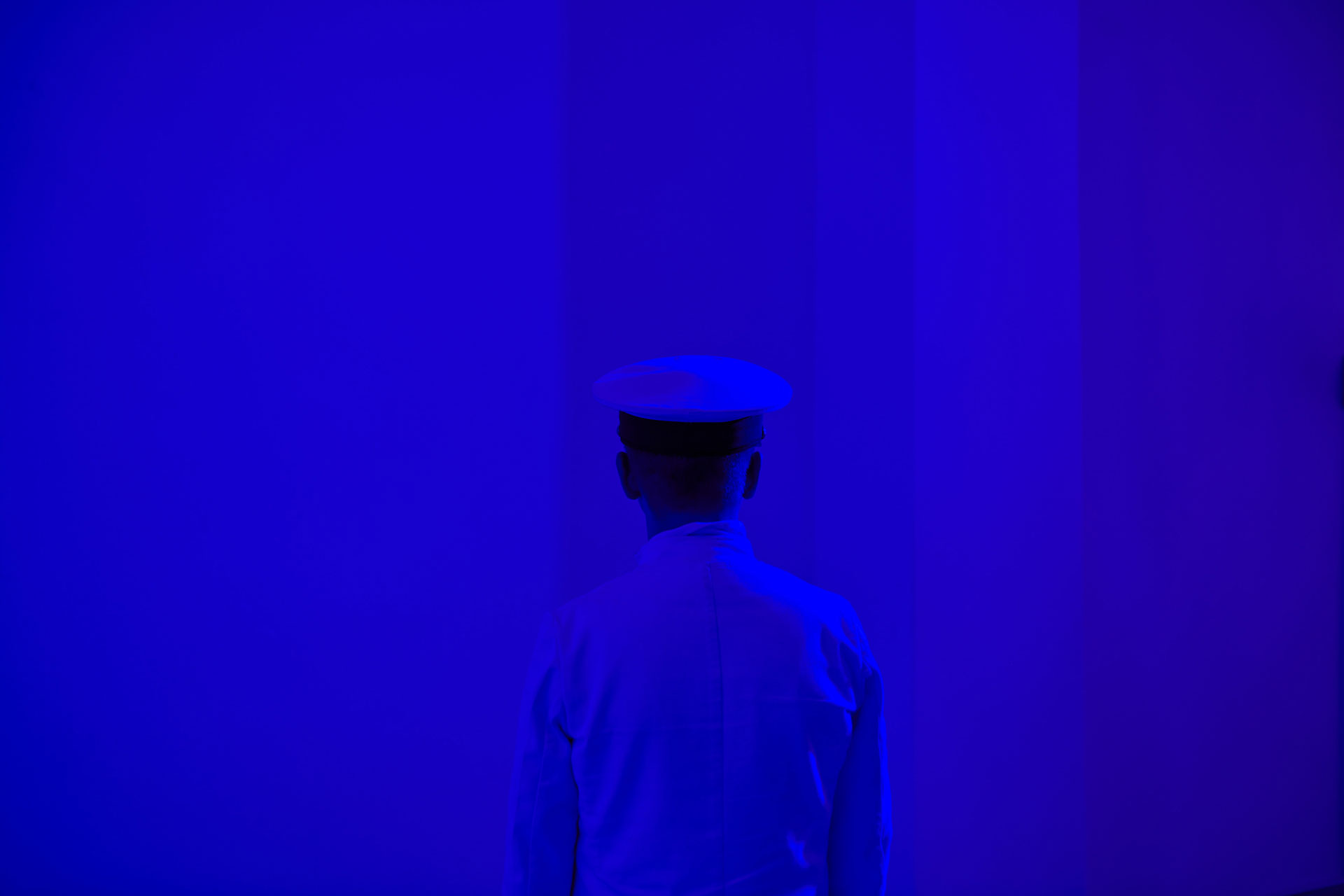